29th: 1 Red-breasted Merganser and 1 Red-throated Diver off Calgary beach and at least 2 Kittiwakes near road to east of Ensay Burn mouth. A Jay was reported at West Ardhu, Dervaig (JA).
Usual suspect: Kestrel 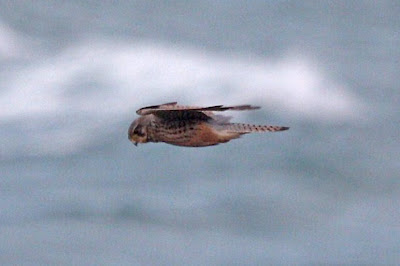 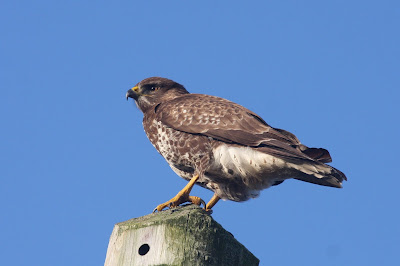 It wasn’t until it flew that the reason became clear, it has a prey item in its right claw. 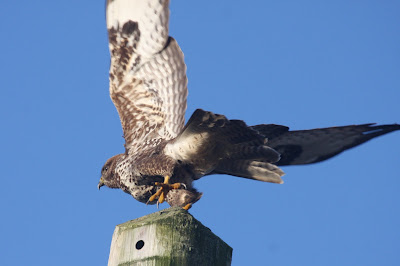 There was 1 or 2 yellow-tagged White-tailed Eagles in the Port Langamull-Langamull area, 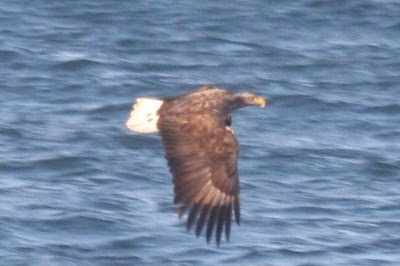 1 Reed Bunting to the southeast of Cillchriosd Standing Stone and 3 waders at Lainne Sgeir, were probably Turnstones (or possibly Purple Sandpiper). There was 1 Red-throated Diver off Calgary beach and 3 Golden Eagles above Lainne Sgeir (it was late and the sky was dark but they were calling so take it from me, these are Golden Eagles). 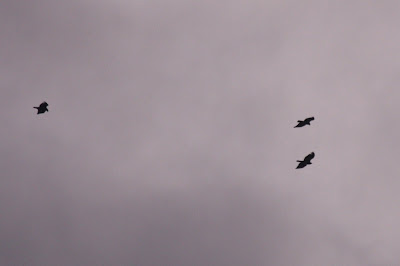 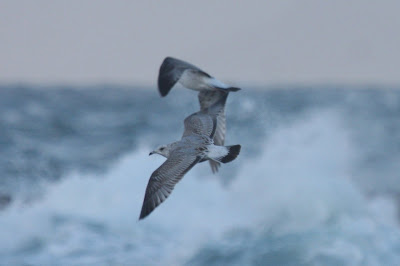 22nd: As it wasn’t enough that Maltese hunters shoot everything that flies over their country, some are even coming here to do it.
21st: I came across this video clip of the critically endangered Spoon-billed Sandpiper. I was surprised that they show chicks being fed by human hand but I presume that is because they are building up a breeding population first and so human imprinting is unimportant. I know there is some controversy surrounding captive breeding in the birding world (there always is,whatever the subject!) but I don’t think there is any choice. Although, releasing into the wild will not help unless the habitats, particularly on migration, are protected. The South Korean coastal wetland destruction at Saemangeum is a major problem as it an essential staging post; that topic is utterly depressing reading. More positive news is the recent discovery of one of their major wintering grounds in Mynamar
The clip doesn’t mention that the captive breeding is going to happen at Slimbridge. What I found most amazing, after reading articles about this in the birding literature, is that the chicks are able to migrate without wild parents. They haven’t done it yet with Spoon-billed Sandpipers but they have with Corncrakes which successfully migrated after at least 10 generations of breeding in captivity. Not so surprising really when may of our migrants also manage their journeys without parents but still, the mind boggles.
20th: A warm night brought a moth (and many flies) to our window. It was very worn but still I thought it must be Scarce Umber (in spite of the name not a scarce moth but one I have only caught twice – both last year). Scottish expert, Roy Leverton was also not sure because it was too worn 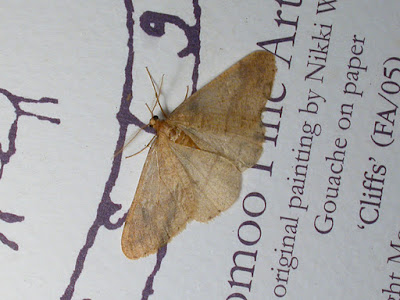 but at the same time as checking he looked through my web album and came across a couple of surprises.
The good news is that we have a new moth to add to the Treshnish list. I am only confident about identifying a couple of the pug species so they all go to experts for identifying. This moth was identified by another expert as Golden-rod Pug. This is not to discredit the first expert but just that he is better at moths in the hand and Roy must be one of the best photograph experts in the UK.
This is the new moth, Larch Pug from June 2008, which has not been recorded on Mull for many years so a good find. 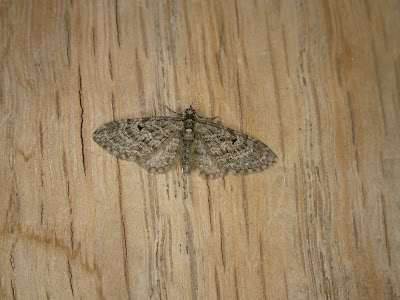 On the down side Roy found another error, this time mine. I identified it as Grey Birch which is wrong so that deletes that species from the Treshnish list (although Tom Prescott and I recorded it at Croig in June 2007). The moth in question is actually a ‘very dark’ Brussels Lace (which I have only recorded once before) 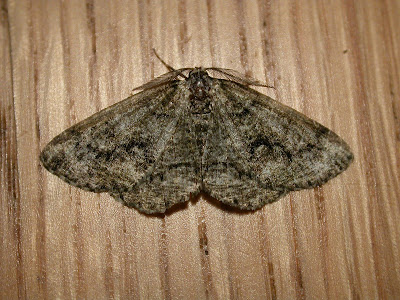 18th: The Dipper was still at Ensay Burn mouth.
17th: A pair of Golden Eagles was over Treshnish lochan (soaring low over Leena) and also reported at Haunn; 1 Hen Harrier on Ensay Burn plantation; 2 Redwings at Treshnish farm entrance and 2 near the hair pin bends up the road.
Our neighbour saw a Jay on the Langamull side of Penmore Mill and yesterday 1 on the Croig road nearer to Croig than Penmore.
Hazel Gloves fungus at the hair pin bend above Ensay are doing really well this year and are visible from the road (last trees beside road). 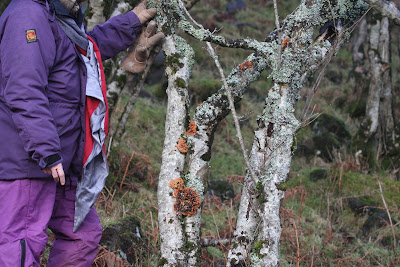 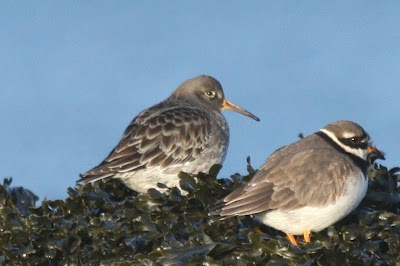 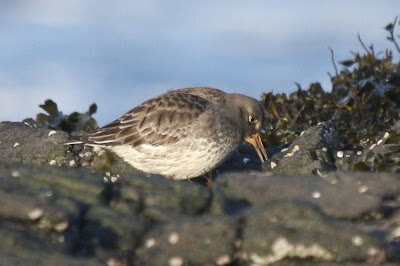 At least 1 Redwing and 1 Fieldfare by Ensay farmhouse. 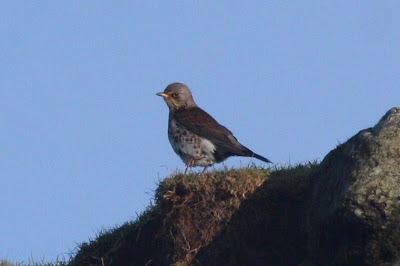 This Shag was fishing in a pool at Lainne Sgeir. 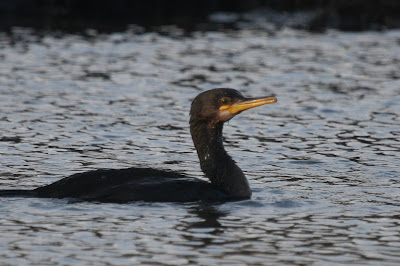 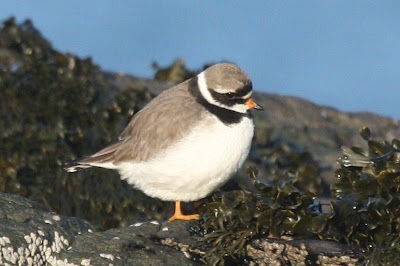 Leena saw a Mountain Hare above treshnish boathouse.
I found this photo of these Short-eared Owls fighting. One is trying to drive the other to the ground.
The English Hen Harrier population is down to 4 pairs, the lowest in 50 years.
A beautiful day today. Previous days especially yesterday have been beautiful in a different way as recent guest Janet Mary Robinson reminds us.
Treshnish Point from Lainne Sgeir. 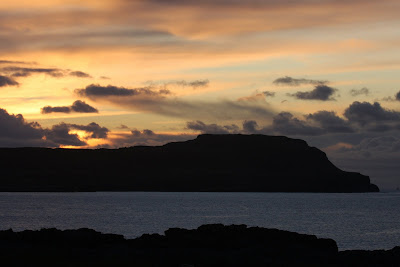 15th: 1 Purple Sandpiper at Lainne Sgeir, Calgary (unusually it was roosting at low tide). Fieldfares heard where Ensay road meets Calgary bay and as usual Tawny Owls heard at night in Treshnish wood.
1 Otter (I think a female) at the rocks about half way between Lainne Sgeir to Calgary beach swimming and fishing to the rocky shore on east side of Lainne Sgeir.
14th: 2 adult White-tailed Eagles and 1 Sparrowhawk at Langamull.
12th: At least 1 Turnstone at Lainne Sgeir, Calgary (there could have been more there but absorbed by below).
Saw an Otter clambering east over the rocks at Lainne Sgeir carrying a big salmon. It swam to a small rocky islet where I realised there was a bundle of fur, another otter. As the bundle unravelled it turned into 2 young otters. Mum returning to her 2 cubs! I watched for about an hour as the mother ate most of the salmon herself whilst the cubs seemed to find bits and pieces to eat under the seaweed along the shore. A Hooded Crow which had been beside the cubs since I first saw them, at one time tried pulling the tail of the mother, she paid no attention. Eventually she let one of the cubs have about 6″ of what was left but even after about 15 minutes the youngster hadn’t made much progress. A couple of times the mother came back and chewed it for a minute or 2 (perhaps to tenderise it). Eventually the fish was all eaten. I think it was just the 1 cub that fed but when the mum finished chewing she could have allowed the other cub to tuck in but I don’t think so as it didn’t seem to be pestering her or the other cub. Whilst the cub was trying to finish off the salmon the mum and other cub rubbed on the rocks and groomed with a very small amount of play. When they had all finished they headed to waters edge and disappeared behind a rock and I lost track of them. All in all probably my best views of an otter family. Too far off and dark for photos.
11th: 1 Long-tailed Tit by farm track by Ensay Burn; up to 40 Fieldfares and Redwings moving between Treshnish wood, Ensay and Reudle Schoolhouse attracting the attention of 1 Sparrowhawk and 1 probable Merlin; 1 ring-tailed Hen Harrier at upper Ensay Burn.
9th: An immature White-tailed Eagle flew over Treshnish Old Schoolhouse and the Sitheans behind. I think it is a 2 or 3 year old judging by the spotted breast. 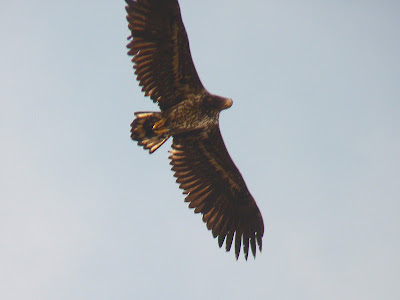 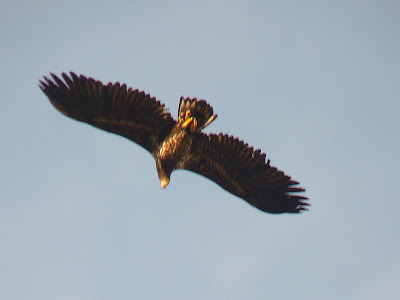 At about the same time Leena also saw a pair of Golden Eagles on Crauchan Treshnish. About 2 hours later I saw an unidentified eagle perched on the sitheans.
There was 1 Red-throated Diver off Lainne Sgeir, Calgary and another off from where the road turns inland towards Treshnish entrance.
There were 5 Turnstones and 1 Purple Sandpiper at Lainne Sgeir, Calgary.
Usual suspects: Great Northern Diver. 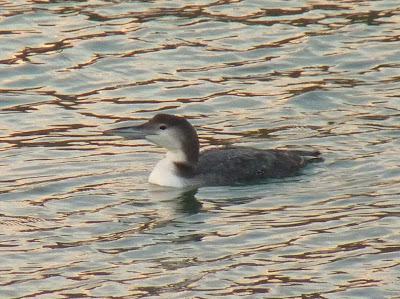 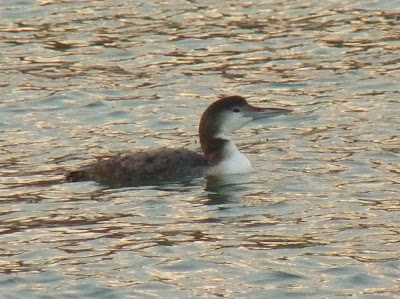 7th: 5 Fieldfares and 1 Redwing where Ensay road meets the Calgary bay coast. Again no sign of the Common Scoters.
6th: 1 Golden Eagle eagle flew west along the shore at Ensay Burn mouth (I think it was an immature).
No sign of the Common Scoters in Calgary bay but the drake Red-breasted Merganser is still present.
Flocks of at least 10+10 Whooper Swans were reported flying low over the sea at Treshnish Point.
5th: Only 2 Common Scoters off from Calgary boathouse; about 8 Long-tailed Tits by Treshnish Old Schoolhouse; our neighbour reported 1 Jay beside the road through Langamull (I went to look for it but no luck – I have never seen a Jay on Mull).
4th: No sign of the Common Scoters in Calgary bay but hale and poor visibility may have hidden them.
3rd: A pair of Golden Eagles were calling very loudly and excitedly in and below Treshnish wood. I couldn’t get a clear photograph through the trees but looking up I saw what was causing the excitement. Another Golden eagle sky diving high up above. 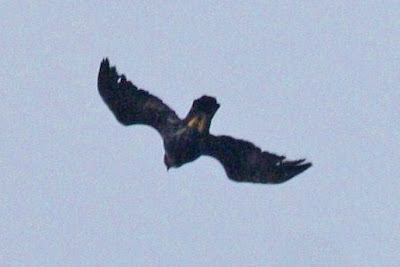 1st: 20 Whooper Swans flew from Calgary direction over Lainne Sgeir to Treshnish Point, from where they headed south, 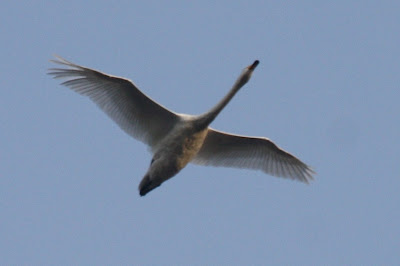 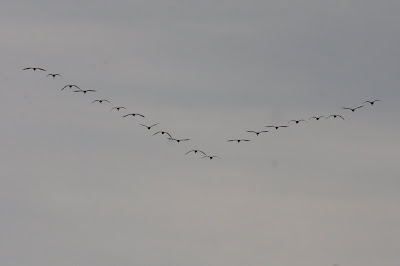 only 8 Common Scoters today at pier and later near the beach, 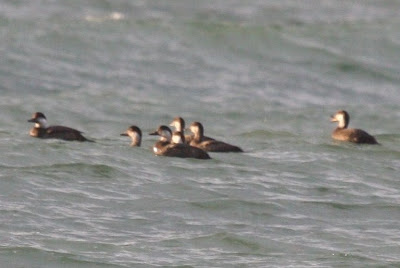 1 Red-throated Diver near the beach, 1 immature Golden Eagle flew north over over the bay from Lainne Sgeir 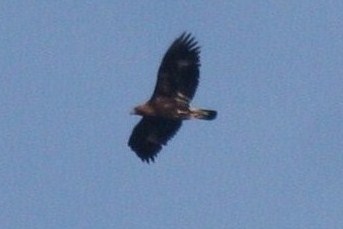 where there was a lone Buzzard calling and flying with deep wing beats. After a couple of minutes another Buzzard appeared from the west and after soaring to meet the first bird they both started displaying with shallow undulations and mutual soaring.
At least 2 Redwings and 1 Fieldfare at Ensay farmhouse.
Usual suspect: Heron. 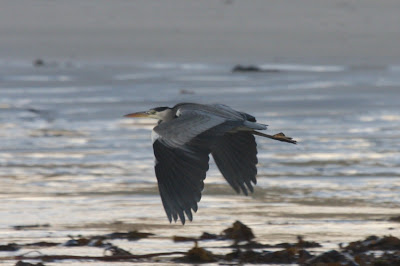