I was away for a couple of weeks. Highlights of non-birding trip: murmuration of Starlings at Gretna on 14th and Leighton Moss Lancashire on 27th, Red Kite at Nidd hall Yorkshire (SE300607) on 20th and another to east of Knaresborough, Yorkshire (where A59 crosses A1 – SE406567) on 25th, Grey Partridge, Colton Lane, York on about 22nd, aurora boralis seen from south of Wray, Lancashire on 14th, 2 Marsh Harriers and 30 Little Egrets at Leighton Moss Lancashire.

28th: 1 Red Grouse at Burg (Mr Pollard).
20th: 1 Chough in north Mull exploring possible nest site (Felicity Pollard & Juliet Vines).
17th: In June I wrote about White-tailed Eagles being accused of causing a Puffin decline on the Treshnish Isles. I argued that there was no evidence to support that claim.
The species that looked like it was in the most serious overall decline on the Treshnish Isles appeared to be the Kittiwake but the data I had was 2 years old.
Today I saw the report by SNH on seabird populations in Scotland over the last 20 years and ALL monitored species are shown to be in serious decline except Fulmar (-7%) and Black Guillemot (stable). Kittiwake (-66%) and Arctic Tern (-72%) are the two Treshnish Isles species which have suffered the most serious declines in Scotland. There is absolutely no suggested link between any of these declines and White-tailed Eagle predation. Tern populations on the Treshnish Isles are extremely erratic so nationwide figures are the best method of monitoring their population changes. Needless to say a 72% nationwide decline in Arctic Tern numbers is catastrophic.
I hope the Treshnish Isles Auk Ringing Group (TIARG) report 2012 will shed more light on the most recent local populations numbers. I have just downloaded the TIARG 2011 report. Puffin numbers have declined slightly in 2010 this does not seem to be different from the overall Scottish seabird trend although Puffin is not covered in the SNH report. Razorbill and Guillemot have increased as have Herring Gull and Great Black-backed Gull (although only slightly) but Kittiwake continues its decline from 2008. 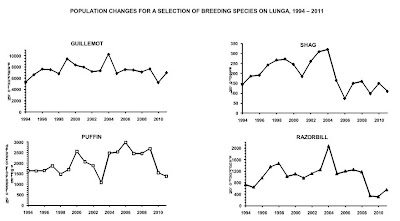 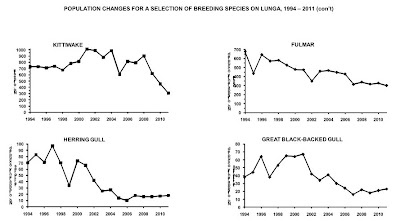 I notice the 2011 report has a drawing of the view of the Treshnish Isles from the gate just beyond Haunn cottages. Click here to see it! And on another of their pages they have a photo of the same view click here.

12th: Mountain Hare at Treshnish Old Schoolhouse.
10th: 2 Fieldfares and 1 Sparrowhawk over Treshnish wood.
8th: About 20 Redwings over Treshnish wood and 3 Turnstones at Lainne Sgeir, Calgary.
7th: Flock of about 50 Redwings and 6 Fieldfares over Treshnish wood and 1 Dunlin on Calgary beach (no sign of the Common Scoters).
Arthur Brown pointed out a Waxwing to Leena whilst shopping in Dervaig (near old smithy). I think there are virtually no berries left in Treshnish wood so the large flocks of thrushes will probably not occur now, although small numbers of Redwings on the woodland floor and Fieldfares on the open land on the Reudle road are likely.
6th: One of the Golden Eagles was display diving, low over the wood near Treshnish House. I didn’t have my camera. Later I managed to catch up with the male at his usual spot in the wood. 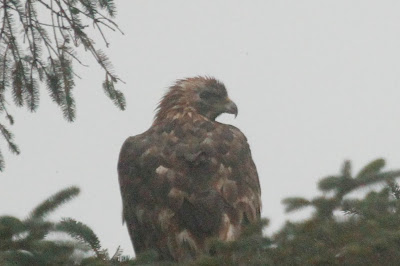 1 Turnstone at Lainne Sgeir, Calgary but I couldn’t find any Common Scoters in Calgary bay.
5th: Didn’t see any Waxwings today despite getting out early and looking all day but Arthur Brown et al. saw 20 at Tostary at mid-day, Alan Spellman saw 20-30 at Torloisk also at mid-day and Rod Little saw 10 at Dervaig in the morning. There has also been up to 6 Common Scoters in Calgary bay for a few days including 3 today (Arthur Brown et al.).
Pair of Golden Eagles, low over Treshnish Old schoolhouse. Unfortunately they didn’t come over when the sun was shining.
The male 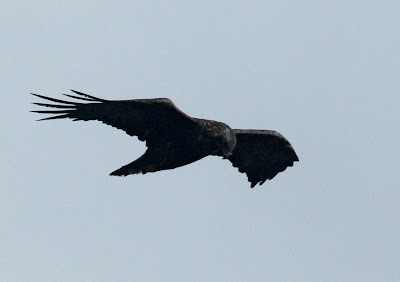 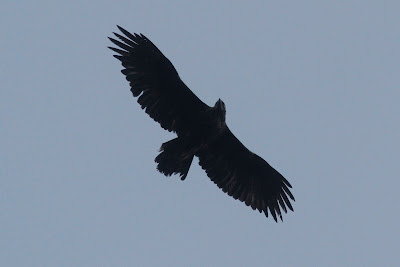 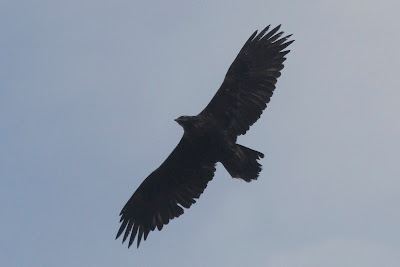 Even the new long tail feathers are already starting to look scraggy. My theory is that because they are not all long and new, the freshest ones take more of a beating.
This is the smarter female 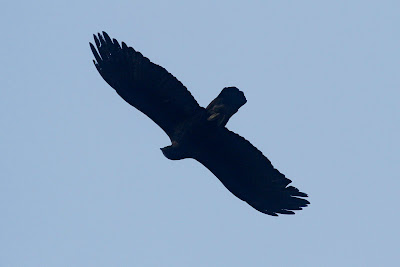 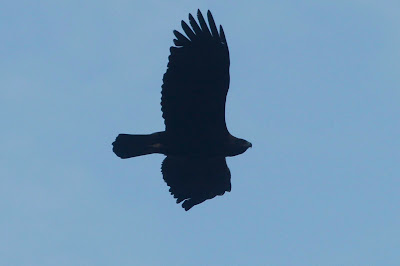 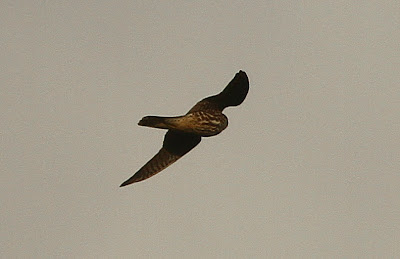 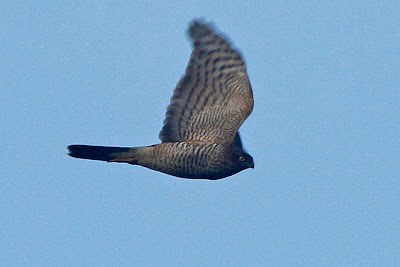 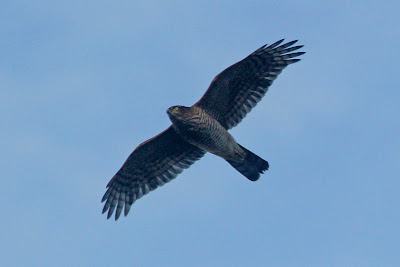 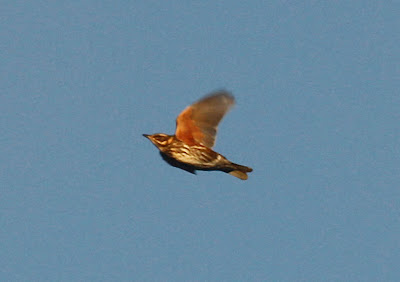 and 10 Fieldfares over Treshnish wood. Our neighbour to the south says they saw over athousand thrushes flying overhead in waves either yesterday or the day before. Arthur Brown says he hasn’t seen so many on Mull before.
This cotoneaster in Treshnish wood (with Mistle Thrush) was taken in the morning 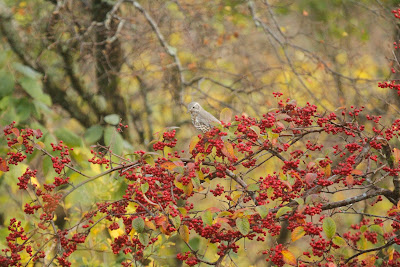 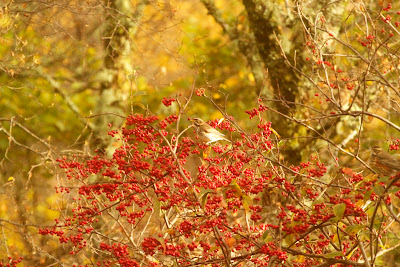 and this was 6 hours later. 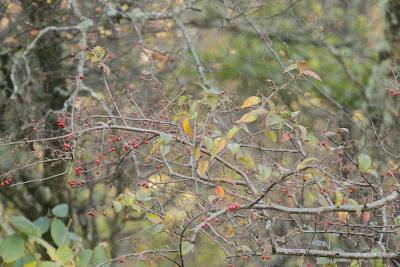 A male Hen Harrier was flying east off shore from Ensay Burn mouth. I have seen them flying over the sea once before off from Lagganulva. I think they are hunting miogrant birds. I’ve deliberative not blown up the photo to show that it really is offshore  (Hen Harrier is in the centre of photo). 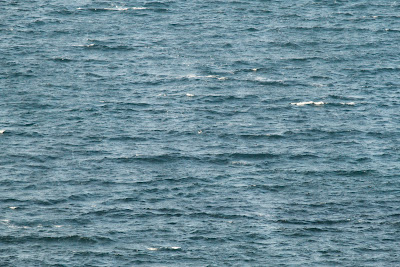 Here is the cropped image. 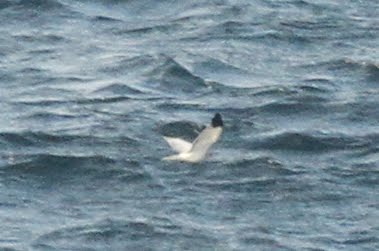 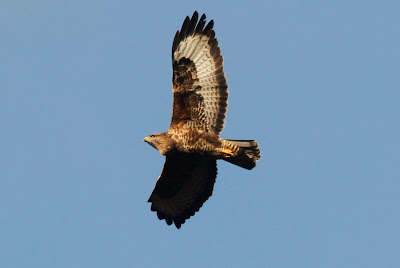 I am not certain but I think this scrapping of redundant laws includes the law forbidding the taking of beached whales because the head and tail belong to the king and queen.
4th: 1 and 2 Waxwings in Treshnish wood (at 3pm) which was teaming with migrant thrushes. It was impossible to count as it is not possible to know if it the same flock being seen. There were at least 50 Redwings and 50 Fieldfares and 1 Mistle Thrushes. The small numbers of Song Thrushes and Blackbirds were also obviously migrants (although not necessary from abroad).
The male Golden Eagle appeared briefly below the tops of the trees in Treshnish wood.
I didn’t have time for photography or to look to see if there were more Waxwings but I did get off a quick shot of the male Golden Eagle. I noticed 2 days ago that his left tail feather is almost fully grown which is visible on today’s shot. 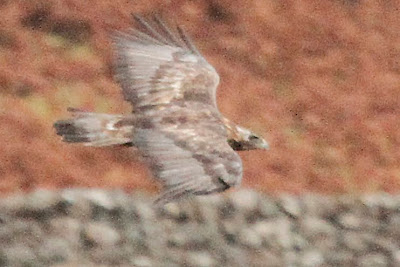 Oh dear. I have just heard some terrible news about the annual massacre of Amur Falcons in Nagaland, northeast India. If you are squeemish you might not want to read this. The Amur is an absolutely stunning little falcon which used to be considered a subspecies of the Red-footed Falcon. Live photos here and if you click on the ‘next’ button or go to the drop down menu at the bottom of the link there are another 60 photos. I have actually been lucky enough to witness this species mating in Assam, northeast India.
3rd: At least 15 thrushes in Treshnish wood
2nd: The Golden Eagle pair off and on all day along the northern Treshnish coastal strip at times very close to Duill cottage (Mallards on the pond their were not alarmed at all). Like last Friday, I was working, so no camera. At least 15 Fieldfares in Treshnish wood.
1st: At least 1 Waxwing. Only the third record for Treshnish (others being 4 on 23rd Oct 2010 and 30 on the following day) 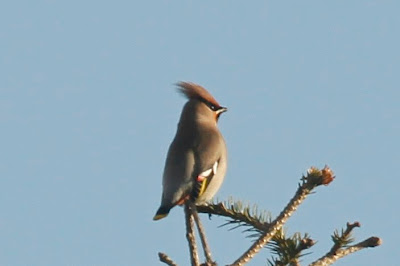 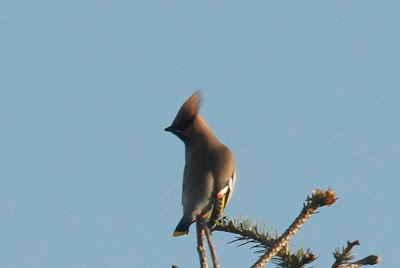 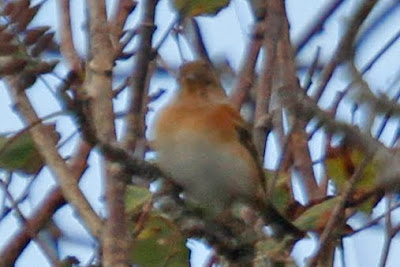 at least 3 Long-tailed Tits near Ensay Burn mouth, at least 30 Redwings and 60 Fieldfares in Treshnish wood. 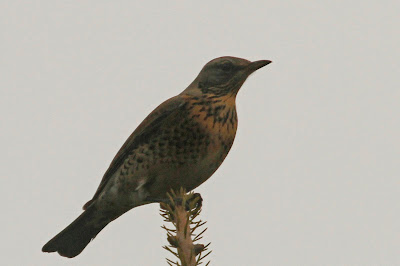