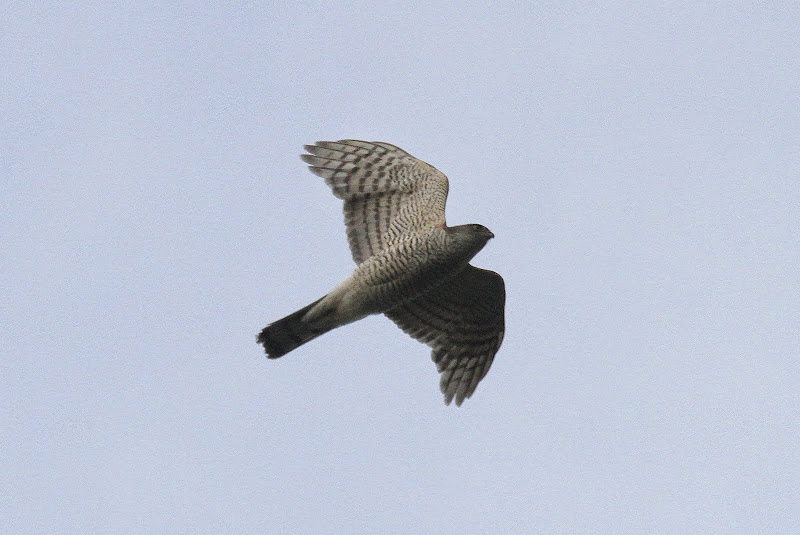 The Black-headed Gull was seen again flying to the lochan. It is a first summer bird so is unlikely to be breed.
19th: 1 Spotted Flycatcher by Ensay Burn cattle-grid (my first of the year and last of the common migrants).
It just needs to open its mouth to feed. 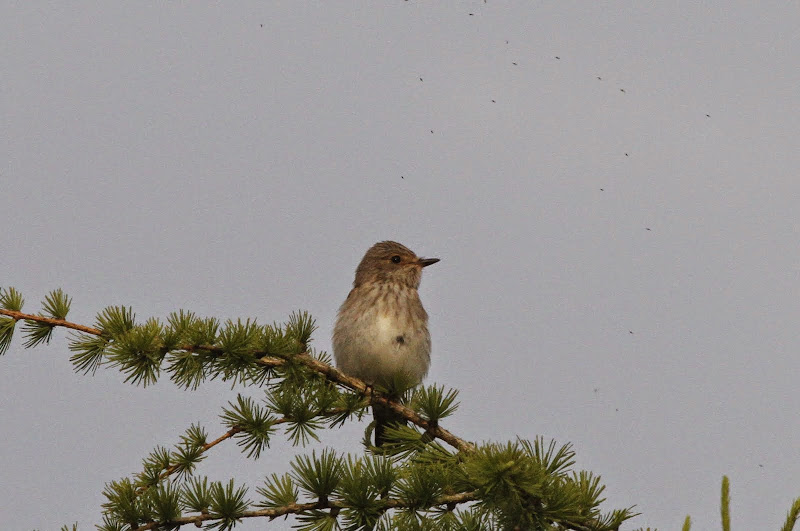 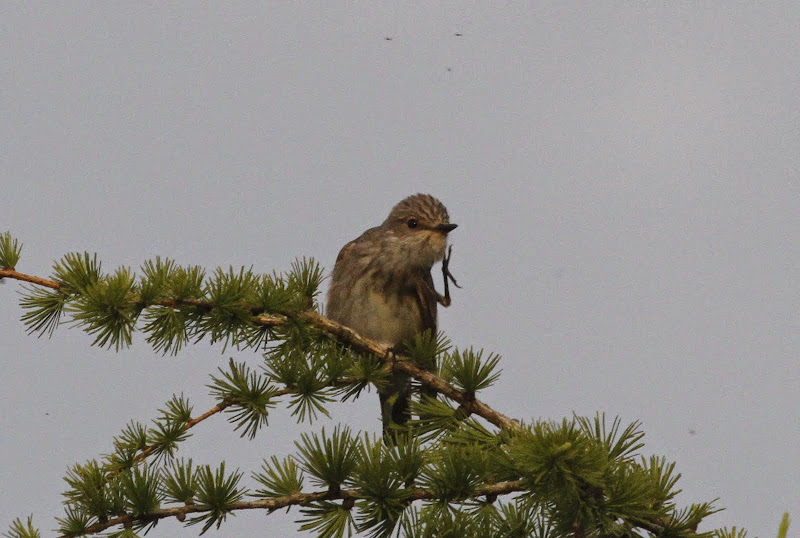 Heath Spotted-orchid flowering by our house (my first of the year). 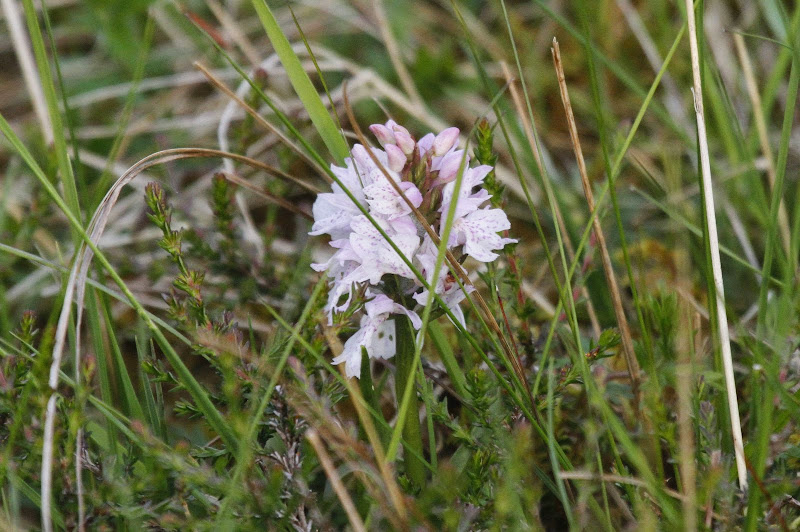 18th: Exciting news today. There is a new breeding species in Treshnish wood, Sparrowhawk. I went looking to see if any Bird’s-nest Orchids were emerging. As I left the site I heard the alarm calls of a Sparrowhawk. It moved from tree to tree and I got a brief view of the tail. Then finally it circled over the wood and I was sure it wasn’t a Kestrel.
It is good to be proved wrong. Last month I saw a Sparrowhawk enter the wood with prey but soon after one flew towards Calgary with a full crop. I presumed that it was breeding elsewhere. About 6 weeks ago a Sparrowhawk was found dead at Treshnish House. My last sighting at Treshnish was on the 11th of May but in the last week I have heard alarm calls in front of our house and I thought could have been caused by a Tawny Owl as no cat was seen. Now I am thinking it could have been a Sparrowhawk. Sparrowhawks can be incredibly secretive when breeding and it was only because I must have been close to the nest that it was so alarmed today.
Also Wood Pigeon calling in Treshnish wood and Bullfinches are still around.
Still no luck with the Bird’s-nest Orchids so it looks like it will be another year. A nearby Narrow-leaved Helleborine is flowering 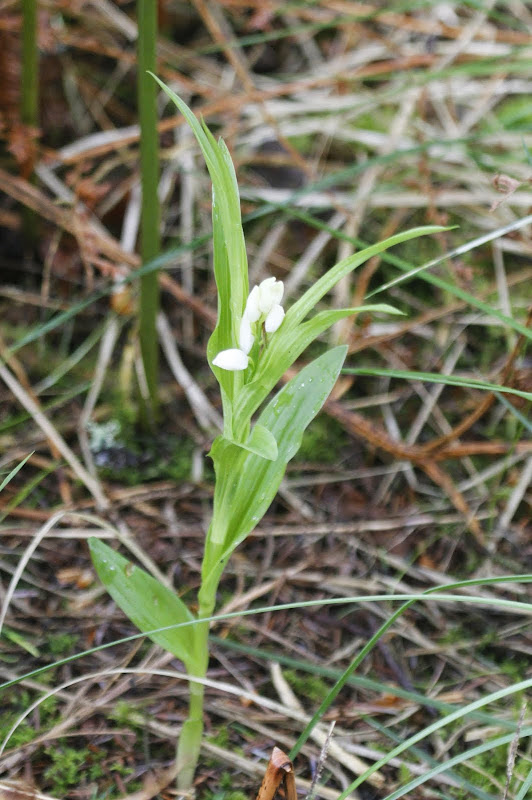 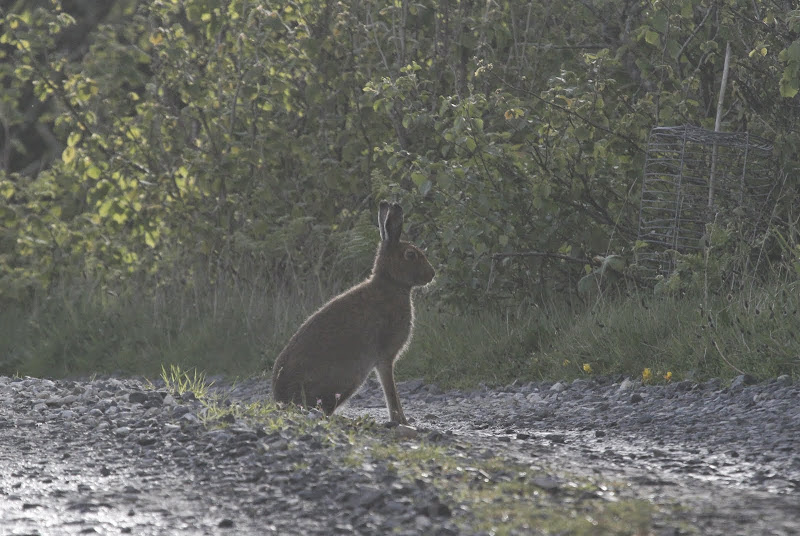 notice the cage on the right to protect the plant (too soon to see how the damage is doing). Perhaps the hare is the culprit although it could just as likely have been another animal e.g. vole.
Carolyne saw 4 Mountain Hares near Treshnish House.
17th: 4 Mountain Hares eating peacefully on our lawn at dusk (a garden record). Now I am getting worried about our emerging potatoes. In previous years, at this time of year, there has often been a Red Deer in the wood but last year for the first time one took a fancy to our potato leaves which they had shown no interest in before. I had made the false assumption that the leaves were inedible or at least badly tasting. I am hoping the potatoes will survive the night but we don’t feel like scaring the hares away.
16th: 2 Mountain Hares in our garden in the early morning and 3 there at 6pm and Carolyne saw 5 below Treshnish House!
13th: 1 Arctic Tern at sandbank at corner of Craignure golf-course, House Martins at Craignure, Sedge Warbler heard at Dervaig reed-beds (all firsts of the year).
At least 2 Porpoises on Craignure – Oban ferry (between the Lismore lighthouses and Oban).
12th: 1 Black-headed Gull flying to Treshnish lochan. Maybe there is a pair. Breeding would be a first for Treshnish. 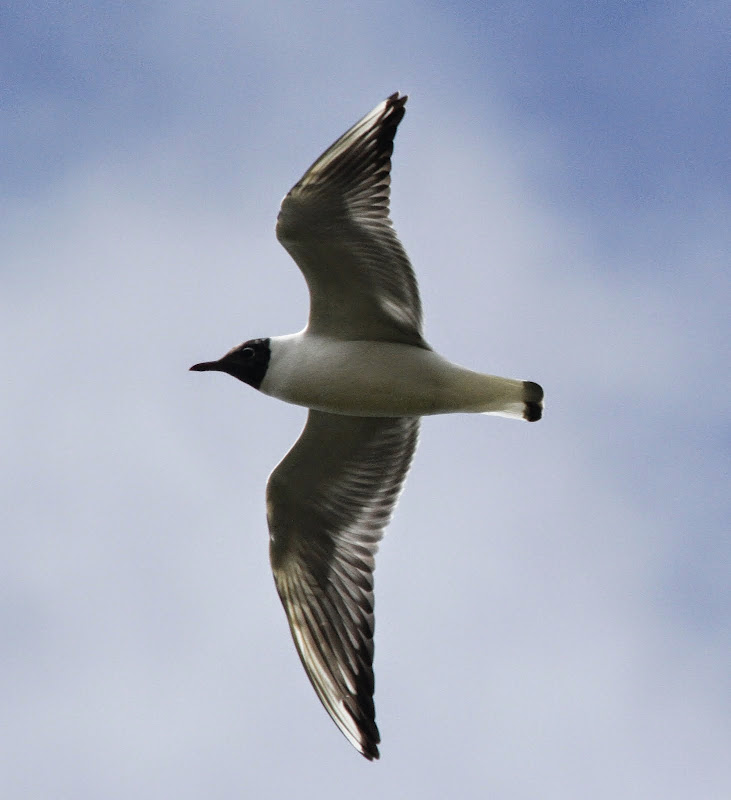 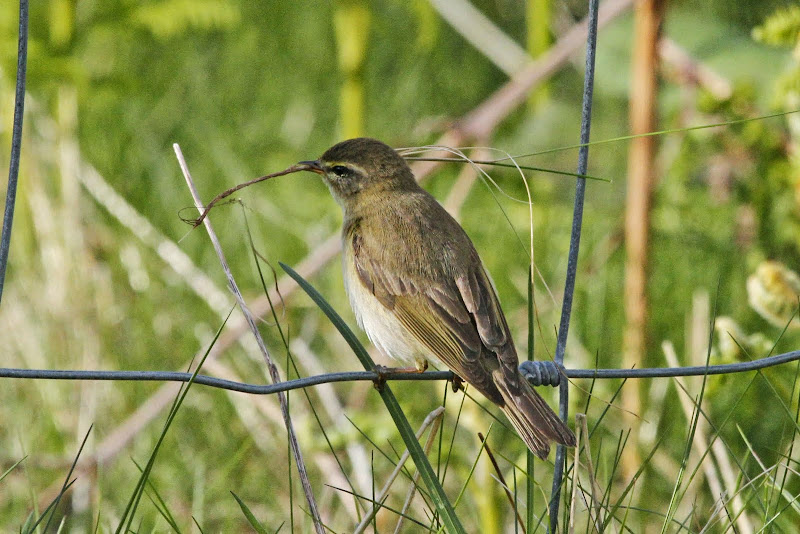 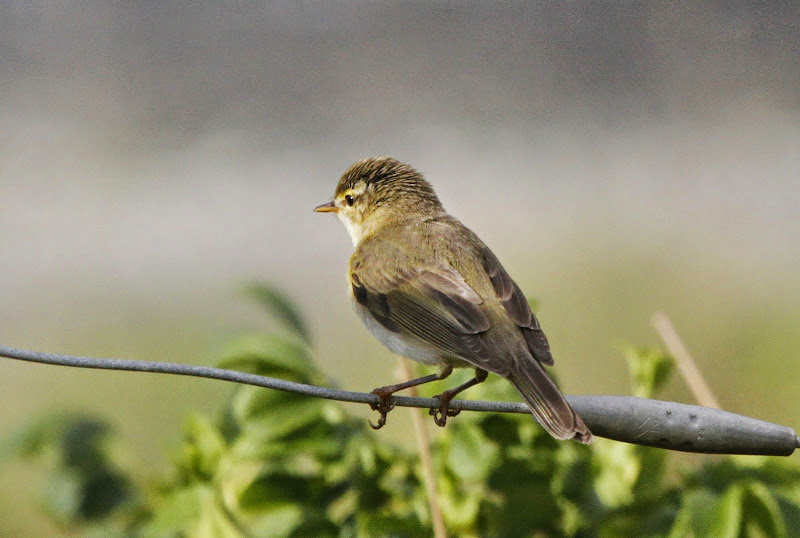 Guests in Shian had an amazing 2 hour encounter with Otter and cub near whisky cave (not sure of date). The mother was catching fish and putting them in a rock pool (live) for the youngster to catch!
9th: 1 Whitethroat heard at Treshnish Old schoolhouse (my first of the year).
8th: an advantage of lazy gardening.
Bullfinches. 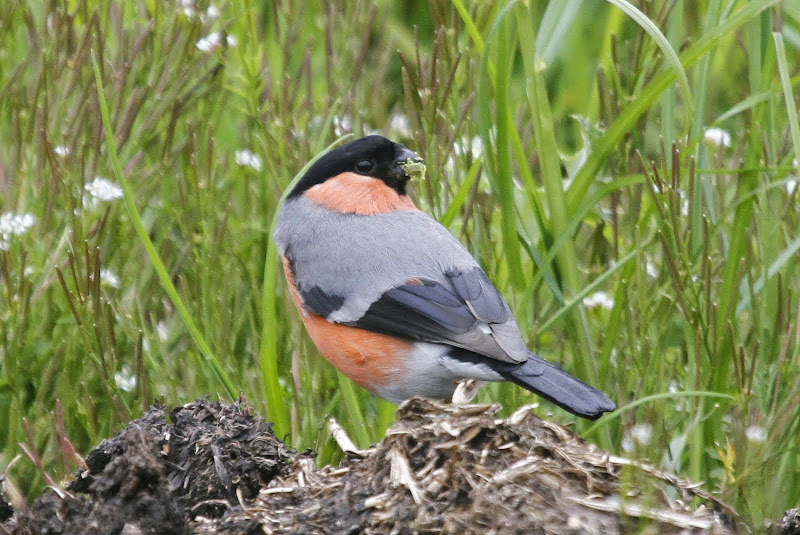 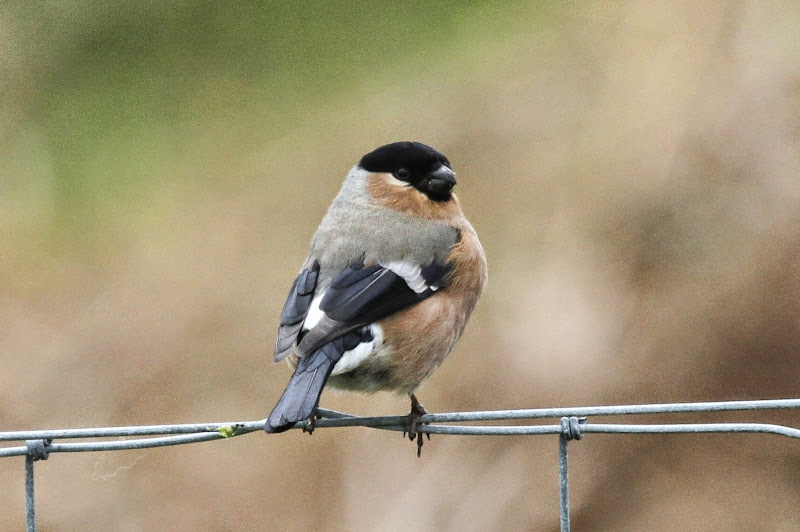 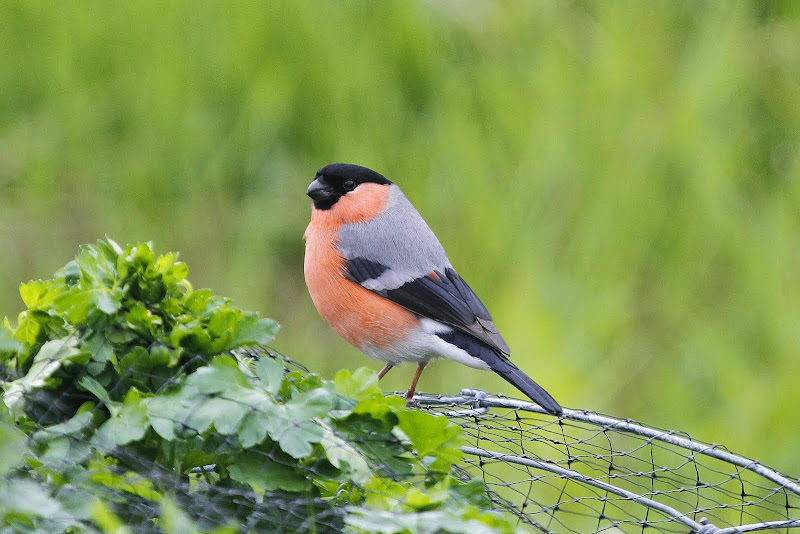 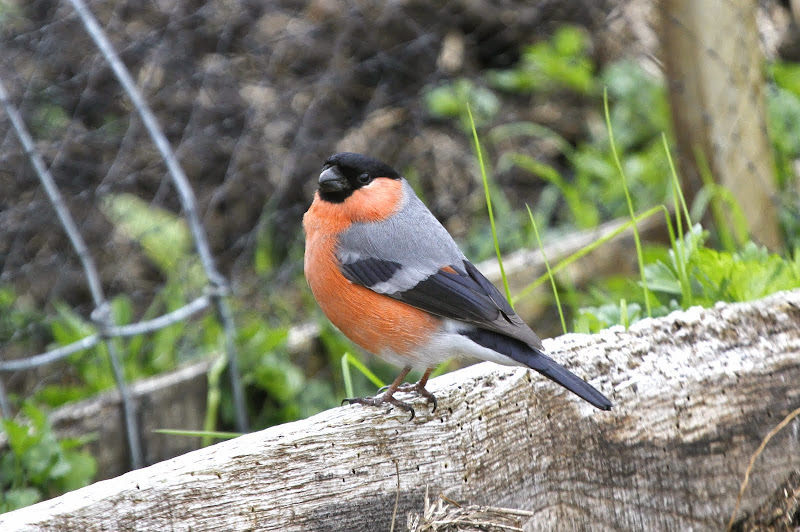 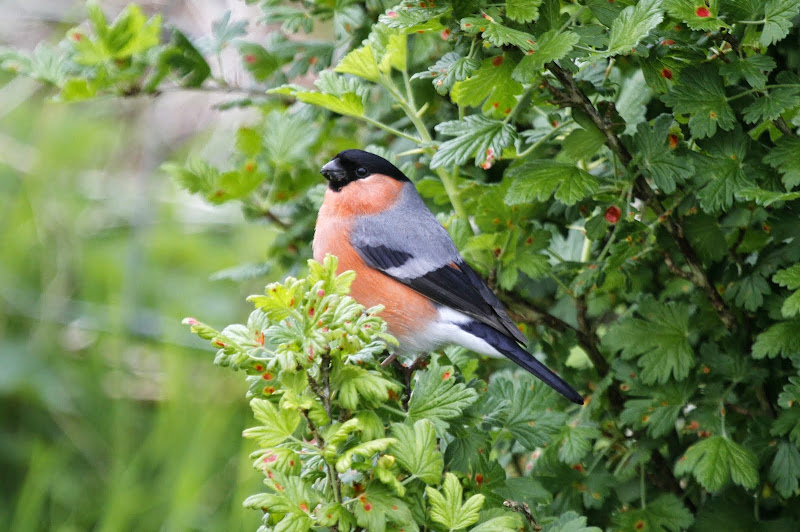 Leena saw both Mountain Hares in the garden in the morning.
There was just the one in the evening. 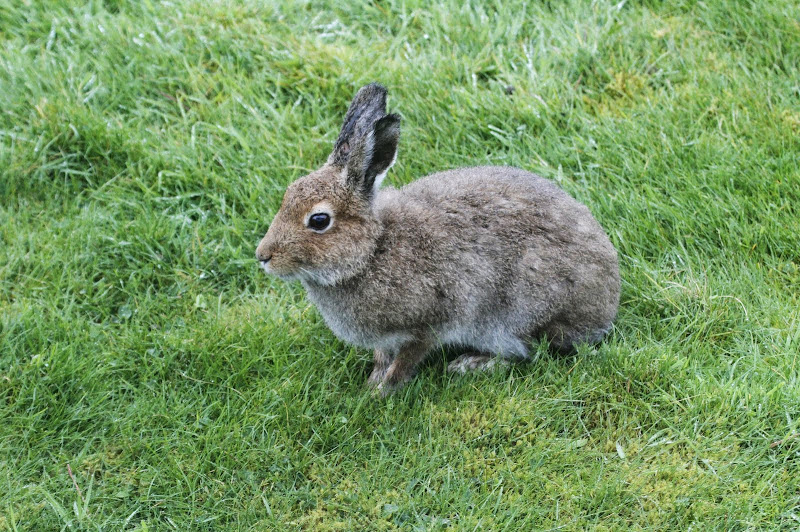 7th: 1 White-tailed Eagle flew west over Treshnish wood.
3rd: A Song Thrush was taking food to it’s nest beside east cottage.
2nd: We just heard that Liz Summers, a guest at East cottage, Haunn saw a Chough on the 27th at 7.30pm just a few hundred yards beyond the cottages. This is a rare bird on Mull although there was one present from at least 20 Nov 2012 to 16 Jan 2013 along the cliffs on the southern Treshnish boundary.
This is the previous bird. 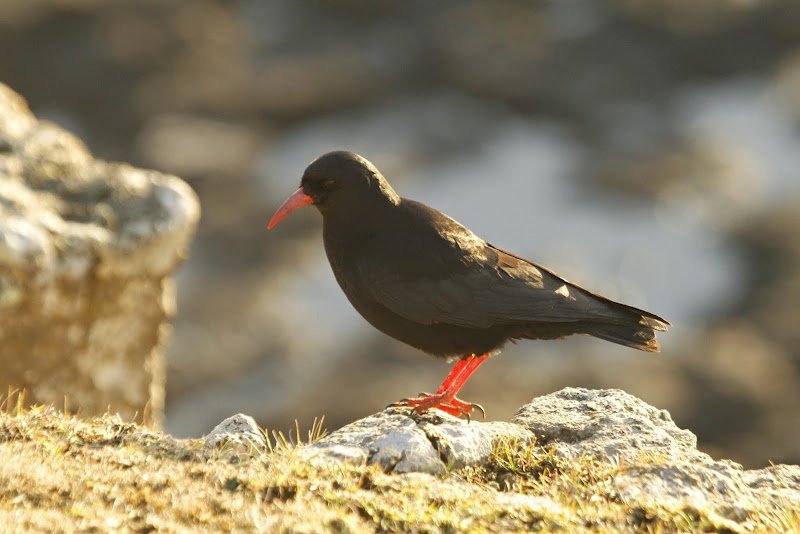 1 Collared Dove and 1 Black-headed Gull at Treshnish wood (both uncommon at Treshnish).
Our daily visitor to our lawn, a Mountain Hare. 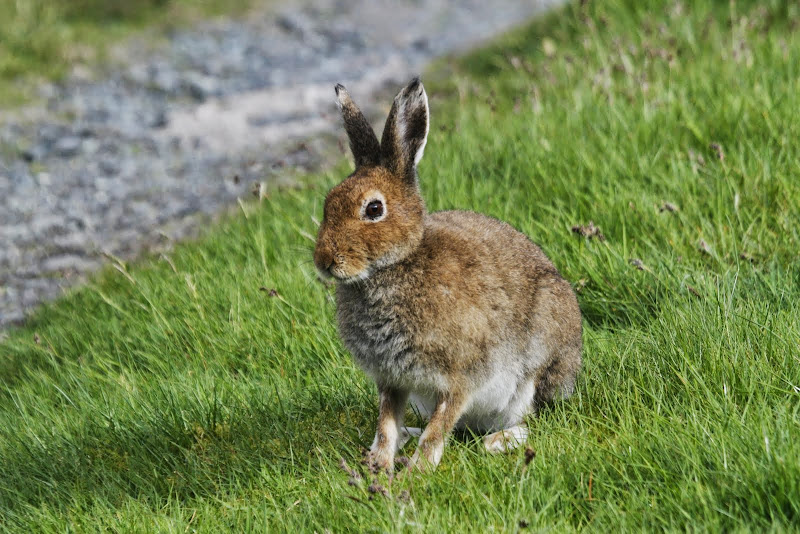 1st: 1 White-tailed Eagle over Dervaig and 2 adults over Langamull car park (couldn’t see any tags).
All 3 divers in calgary bay, Black-throated, Red-throated and Great Northern. This is the first time I’ve seen all 3 in one day and this was all at the same site. Black-throated Diver is uncommon on Mull.
1 male Blackcap in Treshnish wood (my first of the year), and 3 Lapwings and 2-3 Whinchats by road at north end of Loch Frisa near Loch an Torr (my first of the year).